I enjoy the Parks on the Air program. Though I’m not rabid about it whenver I hear a “CQ POTA” I respond and in so doing have worked (“Hunted”) over 200 operations. I’ve yet to activate a park which surprises me because I assumed that would become a regular activity after retiring, but some how I’ve managed to stay busy with other things and haven’t yet had the opportunity. I expect that will change soon enough.

The POTA program offers many awards and a new one appeared in my account this week. The DX Hunter award seen below. I assume this is a brand new award, but I could be wrong about that. I haven’t seen any announcement or explanation about it.

I have noticed that international park operations as part of the POTA program are on the increase:

We are up to 112 DX entities and still growing!!

I’ve been pleasantly surprised to work a handful of DX stations in what used to be a long list of domestic contacts only. Some of those that I’ve worked include Canada, England, New Zealand, Puerto Rico, and St. Paul Island and now that there are more than a hundred entities participating in the program it looks like DXCC POTA might become another thing worthy of chase. 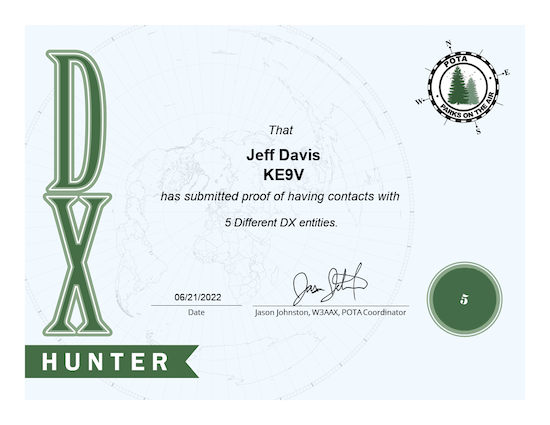