The bands haven’t been overly kind this week. For awhile it looked as though Cycle 25 might be heating up quickly, but over the last few days conditions have cooled a bit.

There have been a couple of Six Meter openings lately that have gotten my attention. While I’ve spent hours with those, none of it has paid off for me. No DX. The same ten US states over and over again. I might have to swear off 50MHz until I get that three-element beam assembled and installed. It’s been sitting (unopened) in the tool shed for nearly two years. Procrastination thy name is Jeff!

No new countries confirmed since I last reported, however, I have added ten more to my DXCC Challenge total.

Did I tell you the one about applying for DXCC and ordering the certificate only to have the postal service chew it up? The ARRL Awards desk was mortified by the delivery photo I sent them and they quickly provided a replacement (thank you Sharon!). It’s hanging proudly on the wall in the shack now ready for endorsement stickers to be applied liberally. 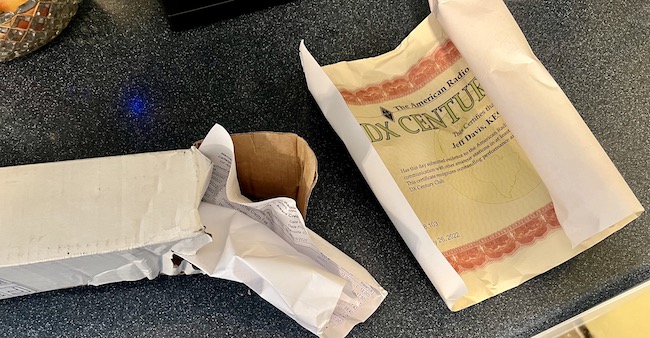